Exemption from withholding tax for the payment of dividends and royalties in the event of acquisition/merger of companies.

Company A based in the territory of the Netherlands, which is a 100% shareholder of company B based in Poland, receives dividends and royalties.

Pursuant to Art. 22 par. 4 of the Corporate Income Tax Act (UoCIT) and Art. 21 par. 3 of UoCIT, respectively, income from dividends and license fees transferred abroad between related parties may be exempt from withholding tax after meeting the conditions of UoCIT. 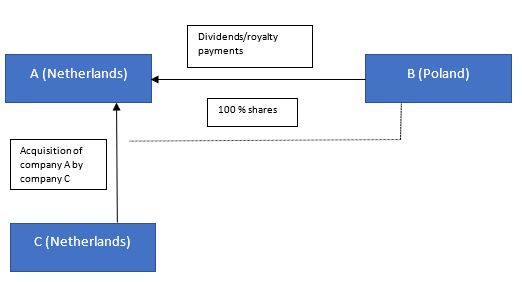 In accordance with the judgement of the Supreme Administrative Court of 12 December 2019, ref. II FSK 211/18, the condition of holding shares (stocks) for a period of two years will also be met if the companies join all the rights and obligations of each of the merging persons or companies provided for in the tax law on the basis of the so-called general succession contained in Article 93 of the Tax Ordinance Act.

The NSA ruled that “(…) since company B. was (…) a corporate income tax payer – which would be obliged to pay in Poland or be exempt from it – it is obvious that art. 93 § 2 point 1 and § 1 of the Tax Ordinance Act should be applied to it, as their provisions concerning the tax consequences of legal transformation, i.e. acquisition of another legal person, directly refer to it. The fact that the company is a Dutch company is of no significance here (…) Therefore, the above regulations do not introduce any exception excluding the provisions of the Tax Ordinance Act on legal consequences. If the legislator introduces such an exemption, it speaks about it explicitly, as for example in Article 7(4) of the Polish UoCIT, which explicitly does not allow for the reduction of income by losses of entrepreneurs being transformed, merged, acquired or divided. A similar regulation is directly included in the case of transformation, merger or division in the case of determining the initial value of fixed assets and intangible assets (Article 16g(9) of Polish UoCIT). Therefore, there are no grounds to consider that the legislator regulated differently the inadmissibility of the acquiring company continuing to hold shares for two years”.

To conclude, in the case of a merger of companies/merger by acquisition on the basis of the so-called general succession contained in Article 93 of the Tax Ordinance Act, the right to apply the exemption to the payment of dividends and royalties to affiliated entities in the scope of uninterrupted holding of shares (stocks) for a period of two years is retained.